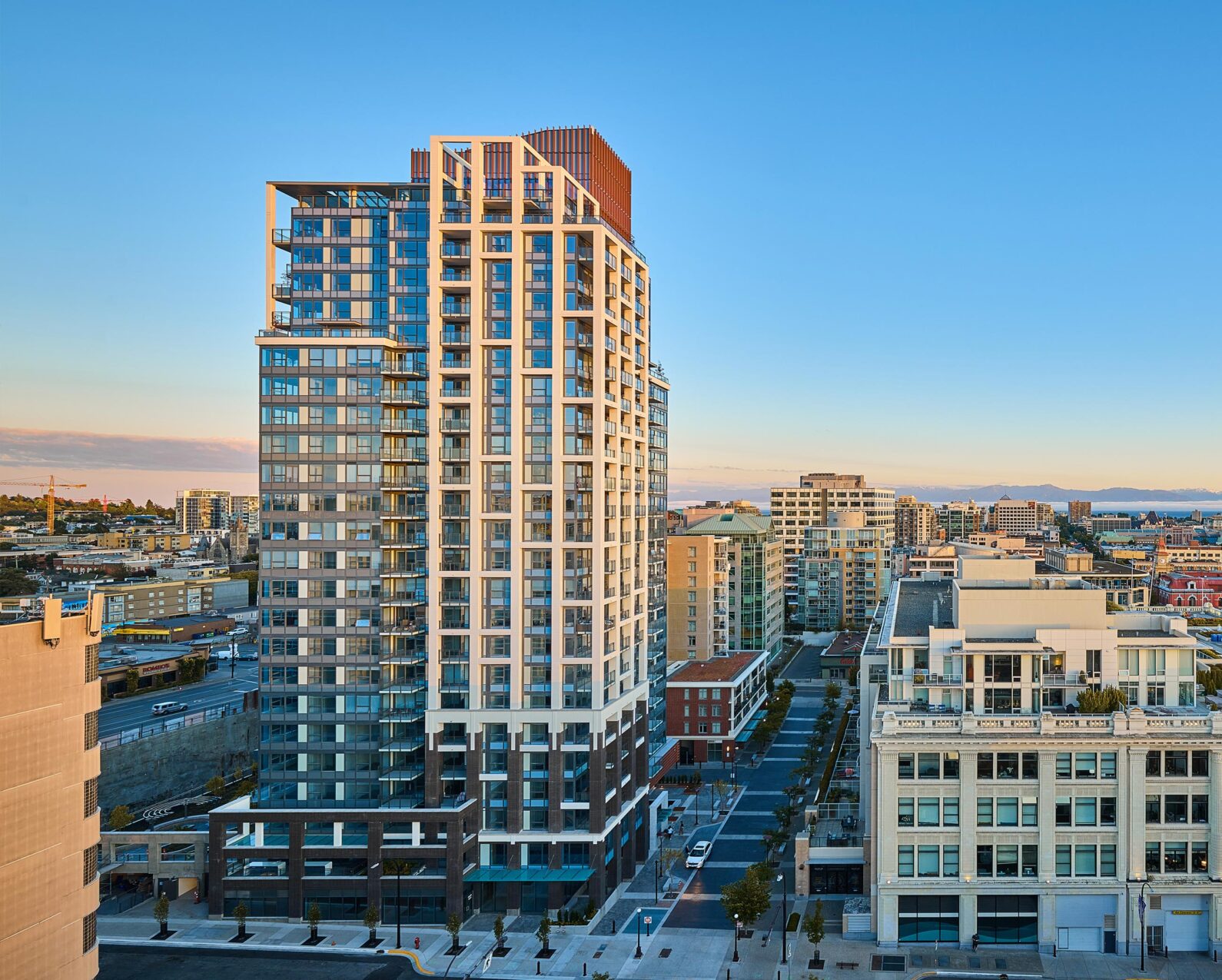 New tallest building on Island is in downtown Victoria

The tallest building on Vancouver Island is officially complete.

After three years of construction, the 25-storey Hudson Place One, on the site of the former Hudson’s Bay parkade in the 700 block of Herald Street, has been capped and is ready for occupancy early next month.

The residential tower, which pierces the downtown Victoria skyline at 85 metres, surpasses the 27-storey, 76-metre Beacon Tower in Nanaimo, and the Promontory on the Songhees, which had been Victoria’s tallest since 2014 at 21 storeys and 67 metres.

Hudson Place One is a centrepiece for Townline, the Vancouver-based company redeveloping the site of the former Hudson’s Bay department store between Douglas and Blanshard streets. Four residential buildings have been completed in the former parkade area east of the restored Hudson’s Bay building, and construction is set to begin next month on two more that will complete the site.

General contractor Al Hathaway said Wednesday that despite construction challenges related to the pandemic, which limited the size of his workforce in the final stages of construction, Hudson Place One — with 176 condominiums — was completed just a month after its original target date.

“We had a shortage of workers over the past four months, but we got it done,” said Hathaway. New workers were not brought on site amid the pandemic for safety reasons, and existing crews had to work longer hours to complete the project.

Hathaway said up to 250 workers were on the site at any given time over the past three years. Finishing touches in some of the suites are all that remain.

The condominiums, which range from 470-square-foot studios to 2,000-square-foot penthouses, are about 70 per cent pre-sold. Hathaway said the first owners will move in July 9.

Elise Virtue, Townline’s sales manager for Hudson Place One, said prices start at $433,900. The third floor features an 11,000-square-foot space of gardens and gas fireplaces. It also has a dining lounge, yoga room and business centre.

Hathaway said Hudson Place One has a lighting installation to mark its status as the Island’s tallest building: The rooftop structure, shaped like a grand piano on its side, is programmed to change colours at set times.

The other hallmark of the tallest building is “it has the fastest elevator in town,” said Hathaway.

He said the last phase of the Hudson precinct’s development will begin July 20. The Hudson Place Two project will feature buildings of six and 23 storeys and be a mix of commercial and residential rentals.

Excavation for that project was completed three years ago when the foundation for Hudson Place One was dug.